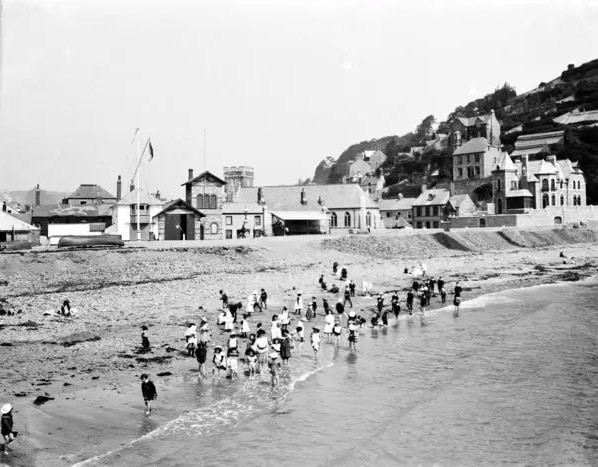 Whilst we know the beautiful setting of Looe here in Cornwall has a rich history, exactly how old is this small coastal town?

Archaeological evidence like the Giant’s Hedge and the Stone Circle at Bin Down, suggests that the area around Looe was inhabited as early as 1000 BC!

Hundreds of years later, East Looe was known as a ‘planted borough’, laid out like a grid-like pattern, with houses being constructed with the living quarters upstairs and storage areas below for, boats, tools and fishing tackle, as even today, the low-lying parts of Looe suffer flooding when the tides are high!

Read on below to find out more about this picturesque Cornish town, and why many people believe it to be the hidden gem of Cornwall…

The Development of Looe

Looe became a thriving town due to being one of Cornwall’s largest ports.  It exported local tin, arsenic, and granite as well as being well known for its fishing and boat building industries.  Records have shown that the town provided 20 ships for the famous siege of Calais in 1347!

The small coastal town continued to expand as the years rolled by, with the textile industry playing a essential part in the towns economics too.  Trade and transportation to and from Newfoundland also aided the town’s success…

However, at the beginning of the 1800’s, Looe’s prosperity started to decline.  The war against Napoleon and the blockade of 1808 took its toll on the country, and this prevented Looe’s fishing fleet from reaching their pilchard-fishing ground, which was the main income for the village at the time, ultimately damaging their trade.

Nonetheless, nearly three decades on in 1828, the building of Liskeard, Looe and the Union Canal linking them, along with the development of booming copper mines in the Caradon area from 1837, meant that Looe’s fortunes began to quickly pick up again.  The canal was first used to transport lime from Wales for use in Cornish farming, and later to carry copper and granite between the railhead at Liskeard and Looe’s port.  In 1860, the canal couldn’t keep up with demand, and it’s main reason for being built was to handle the demands of the shipping trade.  Therefore, a railway linking Looe to Moorswater near Liskeard was then built along the towpath of the canal, which was used less and less, until 1910 when the traffic ceased.  As the mining boom came to an end in 1879. the railway began to carry passengers, which began bringing tourism into the town.

In 1866, a lifeboat station was established on East Looe beach and in 1878 a new Town Hall was built, now known as the present-day ‘Guildhall’.  At this time recommendations were made that the two towns would be merged under the governing body and despite much protest, the Looe Urban District Council was then formed in 1898, to govern the whole of Looe.

In 1411, a wooden bridge was built over Looe river to connect East and West.  A fire destroyed the bridge and was replaced by the first stone bridge in 1436, this bridge featured a chapel dedicated to St. Anne in the middle.  Whereas the seven-arched bridge which remains today, was built in 1853 to cope with the increasing traffic through Looe.

Sometime before 1144, a monastic order began using Looe Island and built a chapel there.  The monks provided a rudimentary lighthouse service using beacons to guide the ships safely into the harbour.  Another chapel was then built on the opposite side on a hill, just outside West Looe, however, both are now just ruins.  Today, Looe Island is part of Cornwall Wildlife Trust and a marine nature reserve, as the waters around it are teaming with life.  The island provides a quiet haven for wildlife, with a variety of habitats, and you can book a boat trip to take you over to the island, where you can enjoy a walking tour as well as the beautiful views across the bay!

With seaside holidays becoming more and more popular in the Victorian age, Looe, with it’s beautiful surroundings and ideal location for both the coast and countryside, started to become recognised as a tourist town.  This trend continued throughout the 20th century, with hotels and tourist attractions springing up here there and everywhere!  With peaks in fishing and boat building during the First and Second World Wars too, Looe grew and prospered, turning into the pretty, quintessential Cornish town we see today.

Nowadays, Looe is still known as a successful fishing port and tourism destination.  Unlike the built up, modernised and jam packed towns such as Plymouth and Newquay, Looe & Polperro with their whitewashed original buildings and houses offering quaint B&B’s, cafes, shops and eateries, add to it’s wonderful charm, making it a glorious place to spend your holidays!